The Sweet Kiss from Heaven

In April this year I was announced the winner for Victoria’s Mother of the Year for 2014. I was nominated by a young lady (my foster daughter) who we took in over 16 years ago. I was surprised, gobsmacked and honoured to receive such an award but how ironic! Here I was getting Victorian Mother of the year when I was hardly mothered myself – in fact I suffered sexual and emotional abuse at the hand of my mother! But what was just as ironic was when they presented me with the winning gifts and tucked amongst them was a CD of Tina Arena! It was then that I felt for the very first time the sweet kiss from heaven!

Being raised by abusive, alcoholic parents meant that I learnt from an early age to escape into a world of my own where I would be safe. It was a world where I could be whoever I wanted to be. And I could even choose my family and my friends. I would spend hours swinging on an old swing out the back of my run down government house imagining what it would be like to live somewhere else and with another set of parents. These thoughts made me feel like I was being disloyal to my real mother but I could not help letting my imagination run free.

It was the late 70’s when I started watching a TV show called, “Young Talent Time.” And it was there right on my TV screen – my safe place, together with a friend, a person that I could confide in. Well in my imagination anyway.

As a child I was small in stature (I still am), skinny with mid-length brunette hair and there on the TV was someone I would consider my twin, Tina Arena. Everyone called her ‘Tiny Tina’ but I preferred just plain ‘Tina’. I would spend countless hours talking to her and planning our holidays together. I would go so far as to pretend that her family would adopt me and I would be her younger sister – this was my happy place away from the reality of my life.

During school holidays we would often go to Melbourne (a city in Victoria, Australia) to see family members but I would tell all my friends that I was going to spend time with Tina that we would be riding our bikes, talking and staying up late watching movies. My friends knew me well enough and my ability to stretch the truth and would graciously go along with my story. Of course I did not know Tina nor did I ever expect that I ever would.

As years passed by I would fondly remember with a smile those years of telling my friends that I had a “special famous friend – Tina.” I eventually left home, received deep prayer and emotional counselling and I eventually healed from the many wounds of my past. My ‘transformation’ enabled me to move forward with my life – and part of that was allowing God to re-define who I now am. This was important as the alternative was to be defined by my past and to live in and from the shadows of the pain, guilt and shame that are the invariable products of sexual abuse.

Eventually I would marry and have children of my own. Being completely free from the chains of my past enabled me and my family to open our arms to a young lady that needed love, a family and a safe place. Sixteen years on and that young lady nominated me for Victorian Mother of the Year.

Curiously, in the same year that I was awarded the winning title of the contest, Tina Arena accepted a role as an ambassador for the organisation that was running the contest. Not only did I receive Tina’s latest CD but I had the pleasure and honour to be invited to Tina’s “Reset” concert and then to the ‘meet and greet’ with her after the concert.

I decided that it would be fitting to ask one of the friends that had walked with me through my childhood and listened to all my stories about Tina – and so I invited Heidi! Here I was some 35+ plus years later, standing in a line with my best childhood friend Heidi about to meet Tina Arena. It was September 2014, six months after being named Victorian Mother of the Year and some 35+ years on from the first time I saw Tina on my television.

In a completely unexpected way this was my sweet kiss from Heaven – a reminder that He hears us, walks with us, shares in our pain and blesses us with the unexpected. 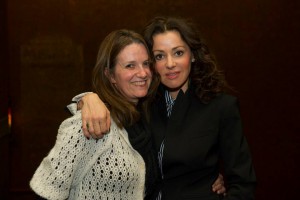 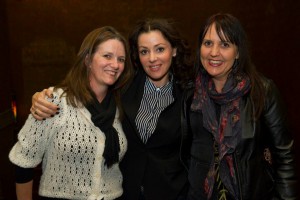